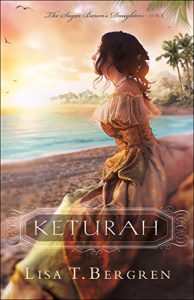 Last week I finished reading Keturah by Lisa T. Bergren, the first in a three-book series called the Sugar Baron’s Daughters. The historical novel follows three sisters as they journey across the ocean in the late 18th century from England to the West Indies and attempt the impossible: rescuing their family’s fledgling sugar farm as women in a man’s world, and an untamed one at that. Here’s the summary from the back cover:

In 1773 England, Lady Keturah Banning Tomlinson and her sisters find themselves the heiresses of their father’s estates and know they have one option: Go to the West Indies to save what is left of their heritage.

Although it flies against all the conventions, they’re determined to make their own way in the world. But once they arrive in the Caribbean, conventions are the least of their concerns. On the infamous island of Nevis, the sisters discover the legacy of the legendary sugar barons has vastly declined–and that’s just the start of what their eyes are opened to in this harsh and unfamiliar world.

Keturah never intends to put herself at the mercy of a man again, but every man on the island seems to be trying to win her hand and, with it, the ownership of her plantation. She could desperately use an ally, but even an unexpected reunion with a childhood friend leaves her questioning his motives.

To keep her family together and save the plantation that is her last chance at providing for them, can Keturah ever surrender her stubbornness and guarded heart to God and find the healing and love awaiting her?

Unlike too many Christian fiction books, this book does not shy away from difficult themes. I personally appreciate that. Good fiction causes us to wrestle with real questions, and that this book does.

Some of the themes she explores are:

Because I’m writing too much, I’m going to rate these on a scale of 0 to 10 and say little more.

All in all this was a beautiful, compelling story rich with description and ripe with topics to grapple with and spiritual truths to glean. Lisa T. Bergren, I’m counting down days until Verity comes out!