(If you don’t like birth stories, you can skip down to the heading below) 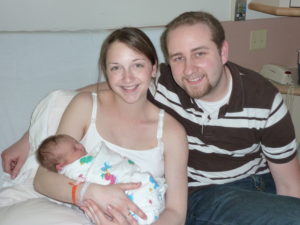 5:15am: I wake up in pain, breath-stopping pain. This isn’t like all the trial runs. This is the real deal.

9:00am: We check into the triage room at the hospital. “Five centimeters,” they say. “FIVE?” I ask. “Only FIVE?” It hurts this bad and we’re only halfway there?

For the next several hours, I labor. The back pain is mind boggling. “I can’t do this,” I say to my husband with each contraction. “I need something to help it,” I say, desperately resigned. I’m only at a 6…only a 7…only an 8. “Just get through this contraction,” he says each time. I get through that contraction. Then another, then another.

1:45pm: Transition hits. If I thought I was in pain before, I had it all wrong. Now it’s too late for the epidural, even if I wanted it. 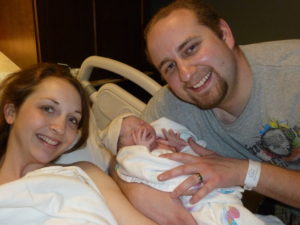 12:00pm: I meet with a college girl for discipleship. Contractions begin. She’s none the wiser.

1:00pm: She leaves. I tell my husband this is it, but to carry on his meeting in the living room while I labor in the bedroom. I’ll let him know when I need him.

1:45pm: Just kidding. Meeting over. The episode of Psych is not an adequate distraction. I can’t do this alone anymore.

2:30pm: We check into triage. “Six,” they proclaim. “SIX?” I return. “I’m only a SIX?” This labor is moving fast, they assure me. The intensity matches the speed.

Yet again, I say to my husband, “I can’t do this; I want something for the pain,” each time a contraction peaks. “No, you don’t,” he assures. “Just get through this contraction.” And then another, and another.

The room is a flurry with activity, much different than the quiet hours of labor in the room before our firstborn’s birth. This baby is coming like a train.

11:45pm: A contraction hits. I shouldn’t be scared, but I am. I know that this will hurt. That ring of fire ain’t no joke, and I know that now. 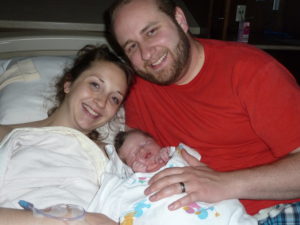 2:30am: We head for the hospital. It’s a busy night. We’re waiting in triage for a room, but this baby is coming fast. And if I thought the previous two were intense, I hadn’t seen intense yet.

“I can’t do it!” I say, “The pain is too much!” “Just get through this one,” he keeps saying. I lock my eyes on the deep blue of his where I find nothing but a love as intense as the pain coursing through my body, and I get through it.

The Labor of Life

All three of our kids just had birthdays in the last six weeks, plus I’ve been hooked on Call the Midwife, so the labor of childbirth is present on my mind.

Today, as I washed dishes after returning from the library with my eldest daughter, I reflected on the day. And it struck me that parenting – really, all of life – is a lot like labor.

Today was an incredibly hard day, involving a sick toddler who spent most of the day (and last night) screaming.  Like the contractions of labor, I thought each time she let out another blood-curdling scream, I can’t make it through this. I could not see an end in sight to the screaming and the sleeplessness and the feeling of total helplessness.

Before dinner, as I bounced the finally calmish toddler on my hip, I kissed her and said, “We made it.” As I washed dishes two hours later with a finally quiet house, I breathed a sigh of relief. We made it. The pain of the day slipped away with my precious ones on their way to dreamy land, and I felt one more little brick of character and faith had been laid in my heart.

How much of life is like that? How often do we look at the clock and think, “How will I make it to 5 o’clock? To next month? To next year?” Whether it’s the unrelenting demands of a boss at work, the insurmountable pain of a lonely marriage, the sheer exhaustion of caring for and raising children, the repeated disappointment of a negative pregnancy test, the overwhelming flood of grief over a lost loved one, or something else, life is full of contractions. Ripples of pain and suffering we aren’t sure we’ll get through, big or little.

You know what’s amazing, though? We get through it. We survive. We come out on the other side, and by God’s grace, sometimes we even come out stronger.

With childbirth, we get through it because we don’t have a choice. Our bodies WILL birth that baby. There’s no stopping it. The only choice we have is how we endure it, not if we endure it. But even that is not the measure of strength. Some people think I’m extra strong because I birthed three children naturally, with no pain relief (on purpose). I don’t think that’s strength – I think it’s madness. I think any woman can do that, because a century ago we didn’t have a choice.

The Source of True Strength

Let me be honest, here – my husband is the real rock star of our labors. I genuinely believe that without his gentle but firm reassurance, I would have gotten an epidural all three times. That’s not to say that would have been weakness, because it’s not – it’s simply not what I wanted. He brought out of me what I couldn’t bring out of myself. With each contraction, with each lock of his eyes on mine, he reminded me of where true strength lies: not in overcoming it all in one fell swoop, but in persevering and sustaining through one contraction at a time.

Faith is a lot like that, too. The good news is that we don’t have to get through it alone. God does not remove the pain in one fell swoop, at least not usually. We have to get through it one way or another. But He’s there with us, with mercies anew every moment. He grips our hand and lets us squeeze the heck out of it. He locks our eyes on His, where we see nothing but a love so intense it endured the greatest pain for our sake, and He says, “Just get through this moment.”

God doesn’t promise us enough strength for the next day, or even the next minute. He promises us enough strength for right now. As we get through each moment, holding His hand, watching His eyes, listening to His words of reassurance, we find that we get through it, and some prize awaits us on the other side. Maybe it’s not a precious new life ushered into the world. Maybe it’s just one building block in our faith as we see one more tick on the wall as evidence of His faithfulness. Maybe it’s just one building block of character in our hearts as He weeds out something that needn’t be there to replace it with a deeper faith in Him. Maybe it’s just knowing that this time we were a little bit calmer and quieter than before because we trusted more deeply that He would carry us through.